One of the classic studies of discrimination in American institutions is “Are Emily and Greg More Employable than Lakisha and Jamal: A Field Experiment on Discrimination.” The researchers responded to help-wanted ads in Boston and Chicago with fictitious resumes which were randomly assigned African American and White sounding names. Employers were 50 percent more likely to call back applicants with White sounding names than African American sounding names. A White name yielded as many callbacks as an additional eight years of experience.[1] 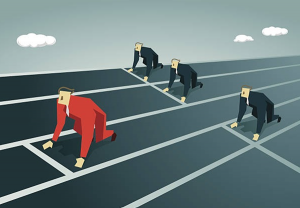 Understanding the root cause of this and other forms of discrimination is critical to uncovering solutions. Yet, whether the root cause is hostility toward underrepresented groups or favoritism toward people who are similar is unclear. A review from Anthony Greenwald and Thomas Pettigrew, “With Malice Toward None and Charity for Some,” argues that favoritism is actually “the prime cause of American discrimination.”[2] Similar results have been found in Germany, France, Great Britain, and the Netherlands.[3]

A series of studies established the similarity-attraction principle in which those with similar attitudes, personality traits, and behavior were judged more attractive than those who were different.[4] The initial study in this series started by administering a 26-item attitude questionnaire to subjects. The subjects were called back two weeks later and asked to judge a person they didn’t know. Each was given that person’s “answers” to the same 26 questions as the sole basis of their evaluation. Unknown to the subjects, they were given one of four questionnaires that systematically varied the responses along a continuum from exactly the same responses as the subjects’ to exactly the opposite responses. Evaluations of those with similar attitudes to the subjects’ were significantly more positive than the evaluations of those with different attitudes.[5] In another study of the allocation of monetary payments to members of one’s own and outside groups, even when members were randomly assigned to groups, it was found that subjects were more motivated to give higher payments to members of their own group than they were motivated to give lower payments to members of outside groups.[6]

Favoritism is even evident among young children. Pre-school children, ages 4 and 5, were given t-shirts, half of which were blue and half red. The children wore the t-shirts every day for three weeks. T-shirt colors were never mentioned during those three weeks nor were the children ever grouped by t-shirt color. The children never divided themselves by t-shirt color. When asked which color team was better to belong to, which was smarter, or which team might win a race, the children chose their own color. The reds never showed hostility toward the blues. “It was more like, ‘Blues are fine, but not as good as us.’”[7]

Greenwald and Pettigrew offer strong, but not definitive, evidence of the dominance of favoritism as the root cause of unequal treatment. At minimum, favoritism is at least a significant cause of discrimination. What, then, should organizations do differently?

Organizations should start by reviewing their human resources and talent policies for sources of favoritism. For example, many organizations pay bonuses to employees who recommend a candidate who is eventually hired and retained. On the surface, this is a good policy since those hired at the recommendation of other employees tend to be higher quality applicants, are more likely to accept an offer, and stay longer. Employee referrals also lower the cost of hiring.[8] However, employee referral programs tend to replicate the existing workforce, since, following the similarity-attraction principle, employees are more likely to recommend prospective employees like themselves. Further, underrepresented candidates are more likely to use formal sources, such as job sites like Indeed and LinkedIn, than informal sources such as employee referral programs and networks. Organizations should consider turning employee referral programs on their heads by only paying bonuses to employees who recommend an underrepresented candidate who is hired and retained for a prescribed period.

Talent acquisition, performance evaluation, and advancement decision making processes are most likely to be influenced by favoritism and should be reviewed. Processes that show favoritism can be improved by requiring objective criteria for all decision elements; by embedding warning signs through training, documentation, or verbal alerts from senior leaders that favoritism can enter the process; and by ensuring that those who are making employment decisions are aware of their own biases and tendencies toward favoritism. Furthermore, when decisions are subject to review, they are less likely to be biased.

Enhancing the internal networks of underrepresented employees can provide more equal access to the benefits of favoritism. “A large body of empirical research shows evidence of the central role networks play in the career development process.”[9] They play a direct role by providing access to mentoring and development opportunities and to the information needed to successfully complete work tasks and an indirect role in “socialization and identity development” processes.[10]

Addressing favoritism ultimately requires a mind shift away from conceiving of discrimination as hostility toward those of other social groups to discrimination as having negative and positive poles. When a talent decision process is suspected of being discriminatory, it is critical to consider how favoritism might be influencing the outcomes and to take action to reduce the influence of favoritism.

[1] Marianne Bertrand and Sendhil Mullainathan, ” Are Emily and Greg More Employable than Lakisha and Jamal: A Field Experiment on Labor Market Discrimination,” The American Economic Review, 94, No. 4 (2004): 991-1013.

[4] Donn Byrne, “Interpersonal Attraction and Attitude Similarity,” The Journal of Abnormal and Social Psychology, 62, Vol. 3 (1961): 713-715 and Donn Byrne, Charles R. Ervin, and John Lambeth, “Continuity Between the Experimental Study of Attraction and Real-life Computer Dating,” Journal of Personality and Social Psychology, 16, No. 1 (1970): 157-165.

[6] Lowell Gaertner and Chester A. Insko, “On the Measurement of Social Orientations in the Minimal Group Paradigm: Norms as Moderators of the Expression of Intergroup Bias,” European Journal of Social Psychology, 31, No.2 (2001): 143-154.

[8] See, for example, Jean Powell Kirnan, John Farley, and Kurt Geisinger, “The Relationship Between Recruiting Source, Applicant Quality, and Hire Performance: An Analysis By Sex, Ethnicity, and Age,” Personnel Psychology 42 (1989); David Caldwell and Austin Spivey, “The Relationship between Recruiting Source and Employee Success: An Analysis by Race,” 36, No. 1 (1983); Vijarya Mani, “The Effectiveness of Employee Referral as a Recruitment Resource,” International Journal of Management Sciences and Business Research, 1, No. 11 (2012); and Guido Friebel, Matthias Heinz, Mitchell Hoffman, and Nick Zubanov, “What Do Employee Referral Programs Do? Measuring the Direct and Overall Effects of a Management Practice, National Bureau of Economic Research, Working Paper No. 25920 (August 2020).

Get notified when we publish